Case for Basic Income for the Arts 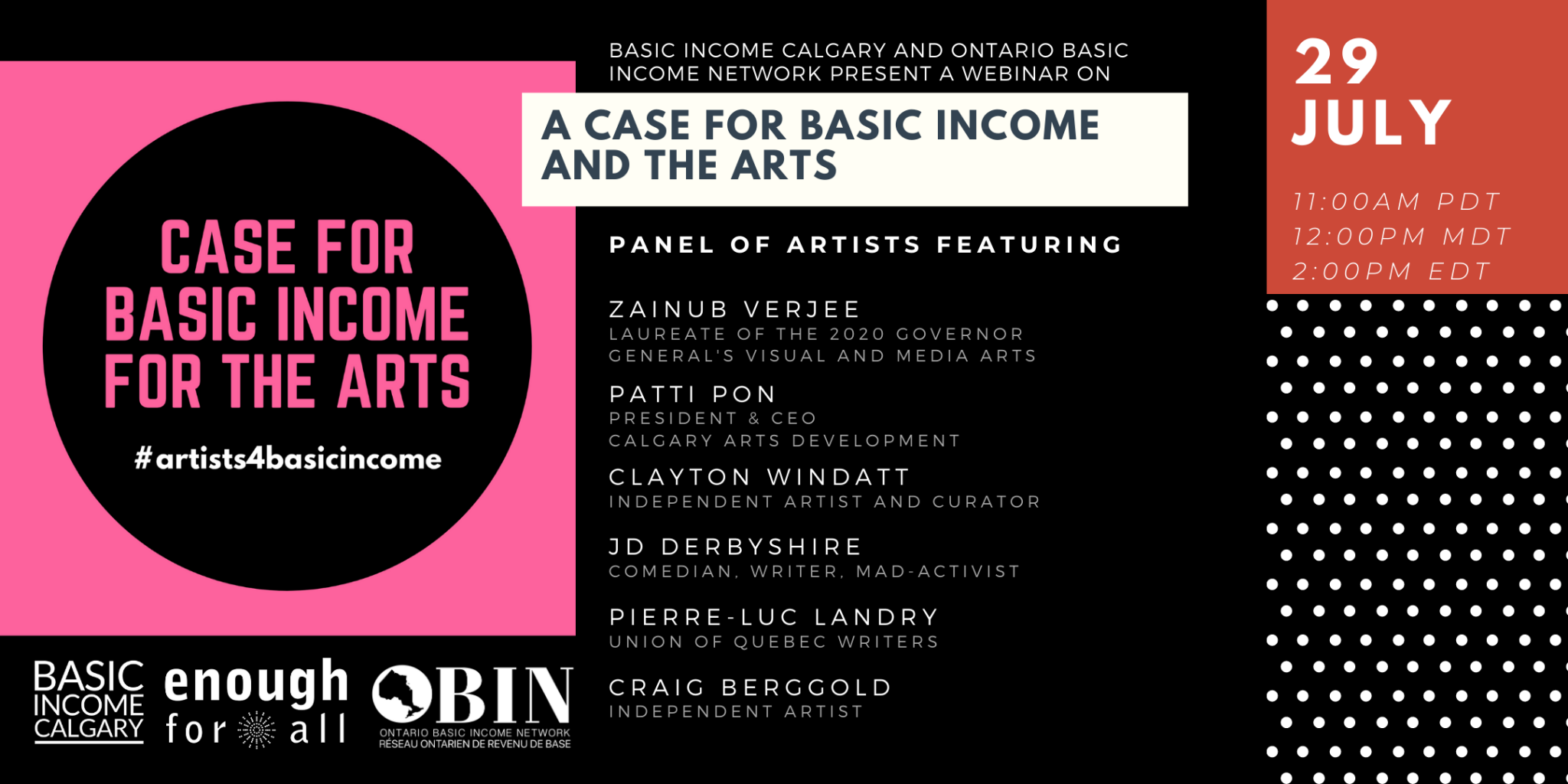 This is a repost from Basic Income Calgary.
Read the original post here.

Our focus in July is the arts and cultural sector, and how a basic income would impact Canadian artists, writers, technicians, and performers. From all across Canada, filmmakers, poets, teachers, opera singers, playwrights, actors, singers, musicians, painters, photographers, curators, graphic novelists, visual artists, circus artists, and others are making their voices heard at all levels of government for change. NOW is the time for basic income.

This is a great opportunity to learn why 75,000 artists signed an open letter, calling on the Prime Minister of Canada to implement a permanent basic income guarantee. What seemed like an impossible, innovative idea, has now captured the public’s imagination.

Here is a link to the slide deck from the webinar

Tools for Conviviality—Building the One Watt Radio Transmitter

Zainub Verjee is the laureate of 2020 Governor General’s Visual and Media Arts for Outstanding Contribution. An artist, critic, a writer with expertise in cultural policy and cultural diplomacy, over four decades she has contributed to international legislations and national policies pertaining to the culture sector. She continues to work on issues of Artist Labour, Racial Equity, Cultural Planning, Cultural Institutions, Cultural Diplomacy and Culture Trade. Former Executive Director of the Western Front, her work on the BC Arts Board led to the formation of B.C.Arts Council. as well as she has contributed to the formation of many other institutions including international ones like IFACCA. Currently, she is the executive director of the Ontario Association of Art Galleries in Toronto where she is spearheading the move to integrate the Public Art Gallery sector into the digital ecosystem. More info: www.zainubverjee.com

Calgary Arts Development President & CEO Patti Pon is a veteran community and arts champion with an extensive track record of leadership and service in Calgary.

Patti has deep and diverse experience in the arts sector, having served as Vice President, Administration at the EPCOR CENTRE for the Performing Arts (now Arts Commons), with stints at the Alberta Performing Arts Stabilization Fund and Alberta Theatre Projects, among others. In the community, she serves on the board of The Calgary Foundation and on a committee for the Calgary Stampede. She was a founding board member of the Asian Heritage Foundation (Southern Alberta) and served on the steering committee for imagineCalgary as well as on the board of CKUA Radio Network.

When not working feverishly as an arts champion, Patti has been known to sip on bubble tea and pondering where her next travel adventure will take her.

Still from the short film “End of the World”

Clayton Windatt is a Métis non–binary multi-artist living and working between Sturgeon Falls and Toronto, Ontario. Clayton holds a BA in Fine Art from Nipissing University and received Graphic Design certification from Canadore College. With an extensive history working in Artist-Run Culture and Community Arts, and through their own activism, Clayton works towards healthier relationships for national and global Indigenous artists and communities. The former Executive Director of the Aboriginal Curatorial Collective, Clayton maintains contracts with several colleges and universities, arts magazines, arts councils, arts organizations, and other organizations as a critical writer, columnist and consultant in addition to pursuing their independent arts practice. Clayton is an active filmmaker and director with works featured in festivals such as ImagineNative and the Toronto International Film Festival and recent commissions by the National Film Board of Canada. Clayton works in/with community, design, communications, curation, performance, theatre, technology, and consulting, and is a very active writer, filmmaker and visual-media artist and was recently appointed to the National Gallery of Canada’s Board of Trustees.

Jan (JD) Derbyshire is an established multi-disciplinary designer and theatre artist, producer, inclusive educator, mad activist and innovator. She specializes in the design of playful and participatory experiences in theatre, movement, new media and events that push forward ideas of diversity, belonging, civic engagement, perception change and practical applications of theory. Recent co-created community engaged projects include, The Citizen’s Monument project with the City of Vancouver, All in, Designing the future of Inclusive practices with The Conference Board of America, Me on the Map with YPT in Toronto and New World Theatre, Vancouver and The Vancouver International Children’s Festival, The Republic of Inclusion, NAC, Ottawa, The University of Guelph revisiting Disability Project, All in, Frank Theatre. Jan is an award winning Canadian Playwright and a critically acclaimed performer with works produced across the country. She is the co-founder of POD, a citizen designer lab and Artistic Director of Nervous system, a performance company in Vancouver. She has a Masters in Inclusive Design from OCAD University in Toronto.

Before joining the Department of French at uVic, Pierre-Luc Landry taught at the Cégep de l’Outaouais, at the Université Laval, at the University of Ottawa and at the Royal Military College of Canada. His research focuses on contemporary literature of various geographical areas (mostly Québec, Canada and France), and on Indigenous literature written in French. He specializes in research-creation—which he understands as an “undisciplined” methodology—and on queer theories and cultural studies. Trained in the field of narratology, he since expanded his theoretical standpoint to include feminist and cultural critics in his toolbox to explore and examine art and literature, and their relationship with society. He is a writer, a publisher, and a queer activist. As a white settler born on Abenaki territory, in southeastern Québec, he is humbled and thankful to have the opportunity to teach, write, and think on the traditional territory of the Lekwungen people, and he also recognizes the Songhees, Esquimalt and WSÁNEĆ peoples whose historical relationships with the land continue to this day.

Media artist Craig Berggold strives to combine social justice activism with a contemporary art practice. His award-winning films, like the National Film Board of Canada documentary Pocket Desert: confessions of a snake killerand Educate Your Attitude, have been broadcast on television and screened at film festivals, museums and art galleries around the world. Craig is the lead researcher at The Canadian Farmworkers Union Archive Project at Simon Fraser University’s Special Collections Library. His writings and photography include: “The Colour of Food” a historical photo essay of South Asian women farm workers and their union organizing; and, the economic apartheid of Canada’s Seasonal Agricultural Workers Program “Canada: Mexico found guilty of blacklisting pro-union migrant workers”. Currently, Craig is a PhD candidate in Cultural Studies at Queen’s University, Kingston, Ontario, where he received a 2016 SSHRC Doctoral Canadian Graduate Scholarship and a Douglas Sheppard Wilson Fellowship in Film. As a Teaching Fellow in the Film and Media Studies Department he has taught on Film and Politics, Science Fiction and Visionary Social Models, and Media and Cultural Studies. At Queen’s, he was President (2014-19) of Public Service Alliance of Canada (PSAC) Local 901 representing 1800+ academic workers. He was honoured to receive the 2017 PSAC-Ontario Activist Award for Outstanding Contribution Protecting Workers’ Rights. For ten years, at Vancouver’s Emily Carr University of Art + DesignCraig taught 30+ courses on video art, film production and experimental documentary practices.  Craig is a co-founder and former Festival Director of the Vancouver MayWorks Festival of Working People and the Arts.

keep up with the conversations and events around basic income